The 5 Legal Tech Themes ILTACON22 Took Away from

Aside from the simple procedure of a meeting, ILTACON is the perfect place to take the pulse of the legal tech community, to gauge the topics that drive product development. Through my conversations with vendors, presenters, and attendees, I kept hearing some major recurring themes, in one form or another. 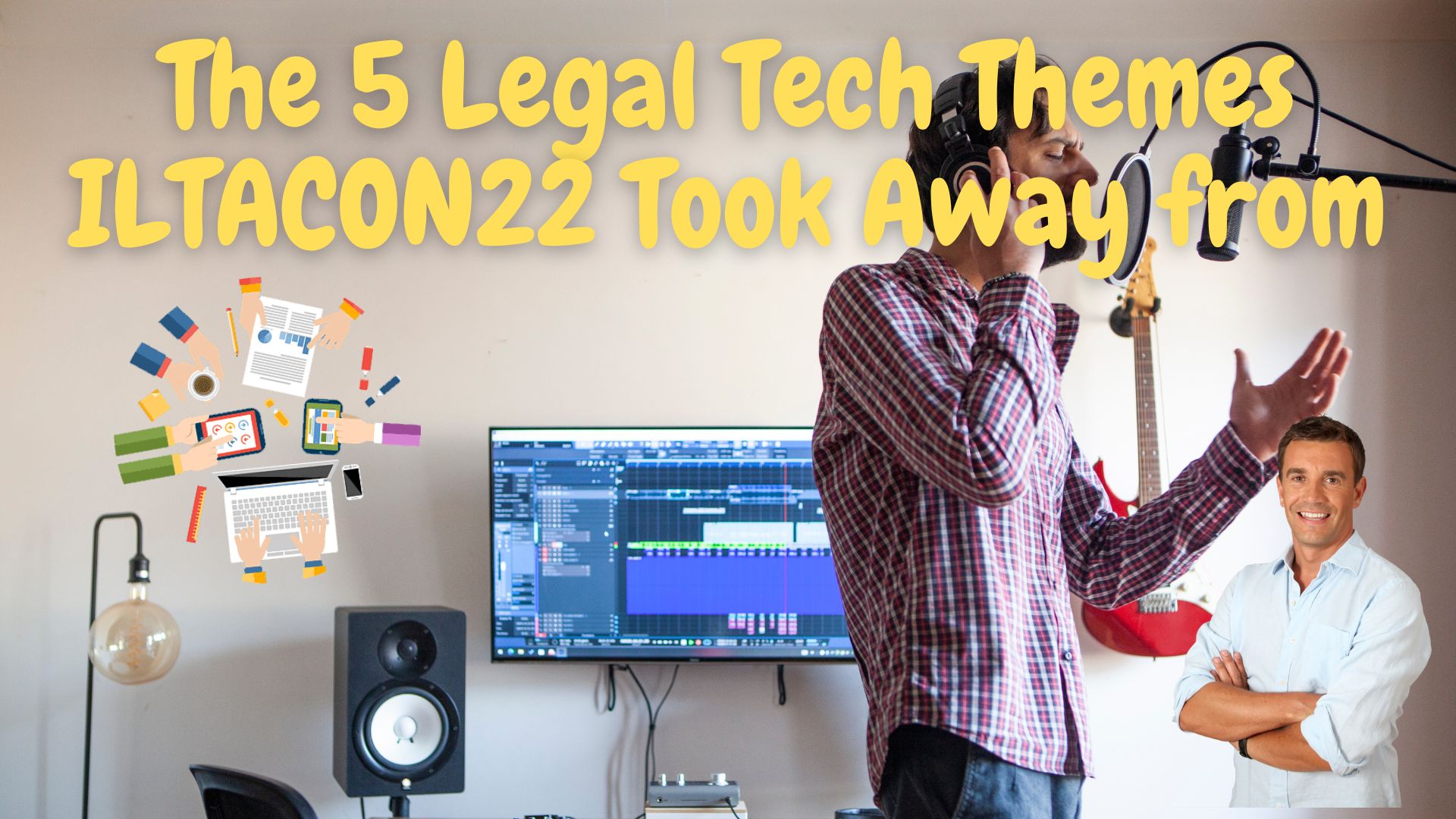 Here are the top five topics I heard at ILTACON:

Most ILTACON attendees come from medium or large law firms, and one fact seems very clear: the legal professionals who work for these firms suffer from platform fatigue.

Platform fatigue is a symptom of having to constantly switch from one application or window to another. TechRadar described the issue well:

Aside from missing something – a very real concern for lawyers and other legal professionals – there is simply the boredom and inefficiency in having to learn and switch between multiple applications, interrupting workflow and lengthening the time taken to complete any given task.

Fortunately, ILTACON has underlined the fact that sellers are increasingly aware of this issue and are responding in different ways.

If system fatigue is the problem, one answer is platform. Think of the platform as a technology ecosystem, offering multiple applications within a single platform. Not only does it facilitate workflow integration and reduce platform fatigue, but it can also enhance security when the platform is a well-established provider.

I’ve written about the platform in legal tech since my 2018 post  The Top 20 Legal Tech Advances of 2018  , citing CRM Salesforce as a classic example, launching AppExchange and opening its platform to third-party developers. At the time, NetDocuments, with   its Directory of Applications  , and Clio, with  its Directory of Applications  , were cited as examples in the legal field.

At ILTACON, it was clear that many companies continue to embrace and expand on this approach. As  reported here recently  , NetDocuments has released PatternBuilder, a native version of a product it acquired last year,  Afterpattern  , a codeless toolkit for building applications and automating legal documents and workflows, which will now be available as an add-on to the  NetDocuments  DELIVER product  .

This platform approach is also relativistic. It also has  its own app center  , offering apps that integrate with the Relativity platform, which are either developed by Relativity directly or by third-party developers.

But the company is also taking a more direct approach to extending the capabilities of its platform beyond classic electronic discovery. One example of this presented by Relativity at ILTACON last week is  Relative Patents  , an application designed to speed up the process of conducting prior art searches.

Just today, Relativity has taken another step in this direction, acquiring contract review firm Heretik, a product that was already built on the Relativity platform by third-party developers, but will now be integrated directly into the RelativityOne cloud platform as an add-on.

Another approach that vendors take to solve the issue of platform fatigue is interoperability. Interoperability allows different products, applications, or systems to communicate with each other, and data is often shared in a seamless manner. The most common way to achieve interoperability is through application programming interfaces, or APIs, which are software that allows one application to talk to another.

At ILTACON, LexisNexis has been making a major push towards API interoperability. As  I mentioned earlier  , last March, LexisNexis announced its   new API Developer Portal  , a self-serve portal that allows law firms to access approximately 99% of LexisNexis content—both raw content and metadata—for integrating it into workflows and applications. Their own. Combine it with their own internal data and third-party data.

Last week, LexisNexis announced API partnerships with two prominent legal technology companies, as part of what  Jeff Pfeiffer  , chief product officer for Canada, the United Kingdom and the United States, described as a step toward “creating a connected world” for legal professionals.

First, with the  Courtroom Insight knowledge management product  , subscribed customers will be able to access Lexis+ and Lexis Context Analytics content about judges and expert witnesses directly from within the Courtroom Insight product, along with information already provided by Courtroom Insight.

Also on the topic of interoperability, there has been a great deal of talk about   the SALI Alliance   – an acronym for Legal Industry Development Standards – and its recently released version 2.0 of the Standards on Legal Matters, in an effort to create a common set of legal industry standards in order to facilitate interoperability Interface between clients and legal service providers and technologies.

On  my LawNext podcast  , I recently interviewed one of the lead developers of these standards,  Damien Riehl  , and at ILTACON, Riehl was part of a great panel,  SALI Standards Enable Data Insights  , that talked about the development of these standards and their potential applications for the legal industry.

Another example of ILTACON interoperability is  Infodash  , a product  I first wrote about last January that  uses APIs to create a highly customizable “cloud first” intranet and extranet for law firms, providing a central hub that can aggregate data and information from systems and systems Other essentials of the company, including financial statements, company directories, calendars, news, customer data, important data, and more.

One word that popped up in nearly every product conversation I had last week was automation. Legal professionals want technology products that free them from repetitive and memorable tasks so they can focus on high-level analytical and intellectual work to serve their clients.

One direct example of this I saw at ILTACON last week is  Bundledocs  , a product that, as the name suggests, does one thing and does it well – compiling and organizing collections of documents into numbered, indexed, and segmented pamphlets – thus eliminating the boredom of doing it manually.

In business in the UK and Asia Pacific regions since 2019, Bundledocs is now entering the North American market, bringing in former  Tikit CEO Peter Zver  to drive the push as Vice President of Revenue and Operations in North America.

The product automates any type of document collection, whether for litigation, business transactions, family law matters, real estate deals or anything else.

Another topic I heard over and over last week has to do with simplifying pricing. While several committees have included the issue of pricing legal services, what I’m referring to is the pricing of legal technology products. Customers of these products are tired of opaque, opaque, complex, and confusing product pricing schemes.

Some sellers hear this and respond. To mention relativity again, last week it announced  its new RelativityOne subscription plan  that collects all user fees into one data fee. Relativity said it made the change because many of its customers deal with a broader range of use cases — such as responding to cyber breaches, data subject access requests, third-party subpoenas, and internal investigations — but separate user fees have been a barrier to using RelativityOne across these use cases.

One vendor seeking to be quite frank about pricing is  Zuva  , the AI ​​contract company that spun  off from Kira  after  Litera acquired  Kira last year. Zuva’s prices are clearly described  on its website  , where buyers can directly sign up to purchase it.

CEO   Noah Weisberg  , Kira’s former CEO, told me last week that Zuva from the start wanted to simplify the buying process for potential customers. Not only is the pricing on the website, but anyone can try it for free and then buy it without having to speak to a salesperson.

Incidentally, when talking about interoperability, Zuva is an API only, designed to enable other app developers to easily embed AI contracts – the same AI that underpins Kira – in their applications. This means that Zuva’s customers are not end users, but rather software vendors, system integrators, and other companies that develop applications themselves.

These are by no means the only themes that permeate ILTACON. Prior to ILTACON, Doug Austin of eDiscovery Today compiled  a word cloud of titles and descriptions of ILTACON sessions  that provide a visualization of key themes. It is no surprise that e-discovery, artificial intelligence, security, litigation, and governance appear frequently.

Another word I heard a lot was partnerships. In keeping with the platform and interoperability topics I discussed above, many vendors are expanding their network of partners — other technology and service providers that complement or enhance their own products.

One example I spoke to last week was  QuisLex  , which, as an alternative legal services provider, regularly uses a range of software products related to electronic discovery, contract review, and other services, and which in the past year has made a significant boost to building partnerships around those products.

Mark Wilcox, Global Vice President of Business Development, told me that QuisLex, as an ALSP, is a tech-neutral company. But through partnerships, it can show its customers how closely it relates to all these providers, and it can help service providers with their sales and marketing in the marketplace.